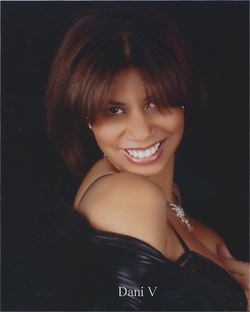 
Dani V. began her career as a child performing in the smoke filled jazz clubs in her hometown of Pittsburgh, PA.  Dani went onto perfecting her voice at the Creative and Performing Arts High School in Pittsburgh.  While in high school, she performed as a background singer in a Rock Band and in a R&B/Pop Cover Band.


Dani V. majored in Music at Duquesne University, she studied Jazz and Classical voice and obtained her Bachelors of Science Degree. Throughout college, Dani V. was one of the lead vocalists for a live soul band, and it was not long before she began arranging vocals for the 10 piece band.  Dani V. became an experienced studio vocalist; It was while working in the studio she found she had other interests - vocal & music production and songwriting.


Dani V. has opened shows for vocalist: Will Downing, Jerry Butler and Yolanda Adams.  One of her fondest memories was singing background for the legendary Smokey Robinson.  Dani V. has been featured in several radio spots, commercials as well as her national theatrical debut as Mary Wells on NBC Television's Temptation Movie.


Dani V. and Danny Mercado have joined forces to created D2 Productions where she sings, writes, produces and vocal produces with Danny Mercado (who has credits with Luther Vandross, George Benson, Olivia and Hersanity).